In 1973, R.C. “Mac” McMeen opened the first physical therapy office in Broken Bow, Nebraska, thanks to the encouragement and support of two local doctors. Initially housed in the local hospital, McMeen Physical Therapy, P.C., promoted physical therapy throughout the state. Little was known about physical therapy at that time, but it has grown into a progressive profession. Mac helped pave the way for physical therapy in central Nebraska and mentored many students, including his son Jeff—who became his business partner—and today’s owners of TEAM Physical Therapy. 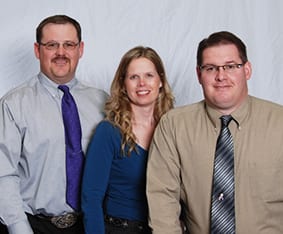 As the need for physical therapy in central Nebraska increased, McMeen Physical Therapy expanded. They moved into a 7,500-square-foot office in Broken Bow, new staff and services were added, and McMeen Physical Therapy became known as a full-service clinic. Over the next several years, additional clinics were opened in Burwell, Callaway, Gothenburg, and Kearney.

While the name TEAM Physical Therapy is new, the company is built on many years of trusted, professional service. We are Together Empowering Able Movement (TEAM) Physical Therapy.

Our Philosophy of Practice

TEAM Physical Therapy, P.C., is the premier manual therapy practice in the state of Nebraska. We believe in a hands-on approach to rehabilitation and treatment. Our therapists have the knowledge and expertise to evaluation all musculoskeletal injuries and conditions.

We will provide the groundwork for physical therapists to live in Nebraska communities and provide quality medical services. We will provide a foundation of growth for personal and professional development for all of our employees. Our goal for each employee will be a positive and rewarding work environment.

Providing excellence in patient care is the main priority of our practice. Our customers will leave our clinics knowing that they have been served to the best of our ability. We take pride in helping patients reach their goals with the best care we can give.